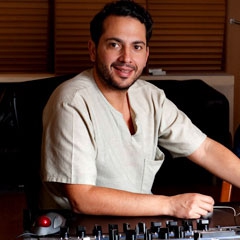 He performed at festivals such as San Sebastian Jazz Festival, Rome, Paris, Hong Kong, Barcelona, Sardinia, Madrid, Zaragoza, Stockholm, Tallinn, etc. For the last 8 years, he has been teaching at one of the most prestigious schools in the world, SAE Institute, where he teaches sound, direct sound and music production, in addition to specific master classes he gives in sound at different public and private institutions in Barcelona. In 2014 he set up his own studio, Hitmakers studio, where he works on the entire production process, from recording to mastering, under the guidance of his partner Marc Rostagno.