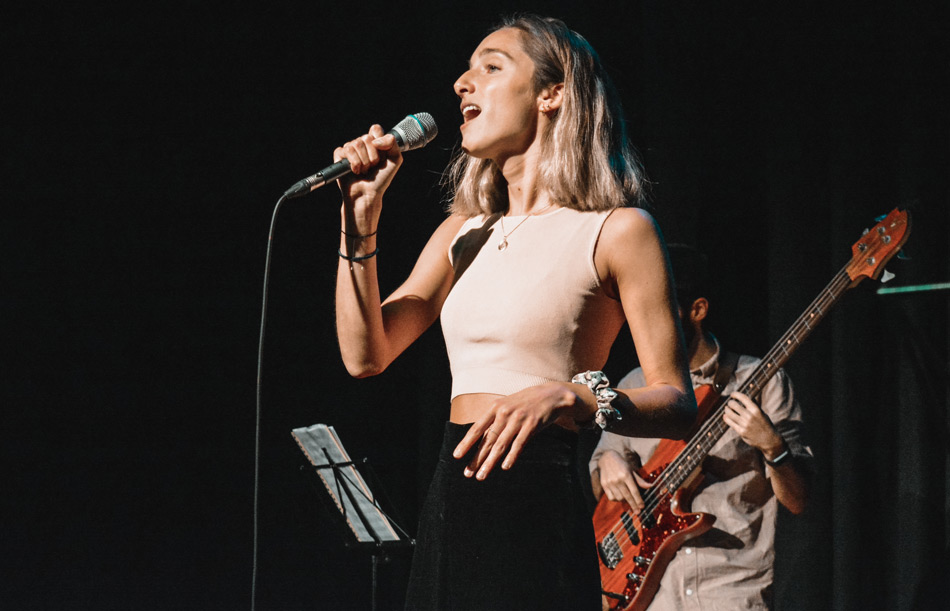 Clara Palet was born in Barcelona and since childhood has sung in several choirs in Barcelona. She studied piano and musical language at Escola IPSI and, later, at Taller de Músics Escuela de Música and has also studied dance and performance at the Coco Comín School.

She has trained in classical singing at the Cor Jove del Orfeó Catalá, in Coro Da Camera Dell’Università di Bologna and in the Cor Vivaldi de la Escola IPSI, with whom she had the opportunity to perform internationally.

She began studying jazz and modern music in 2015 at Taller de Músics Escola de Música and is currently studying the last year of her a certificate of higher education in Jazz Performance, specializing in voice, at Taller de Músics ESEM, where she has trained with teachers such as Núria G. Cols, Carolina Ortiz, Magalí Sare, Joan Monné, Vicenç Solsona, Néstor Giménez, Ramon Cardo and Meritxell Nedderman, among others. In 2019 she had the opportunity to participate in the jazz seminar at the festival Jazz à Vienne (France) and has also collaborated as a singer on several occasions with the jazz quartet Maria Vinent Quartet.

She is trained in choral conducting thanks to the social project Clavé XXI by the Palau de la Música Catalana and has conducted the student choir of the Faculty of Medicine. Since 2020 she has been a teacher and director of the Escola de Veus at Taller de Músics de Barcelona, where she currently directs the Choir and Chamber Choir.

Her musical practice consists of the interpretation of a repertoire based partly on her own compositions and also on traditional songs, from Iberian, Latin American, Italian, Brazilian and jazz music, which she performs in concerts in duet format.

As a teacher, she currently teaches singing and voice combo at Taller de Músics Escuela de Música, and also at the Escola Luthier de Barcelona.