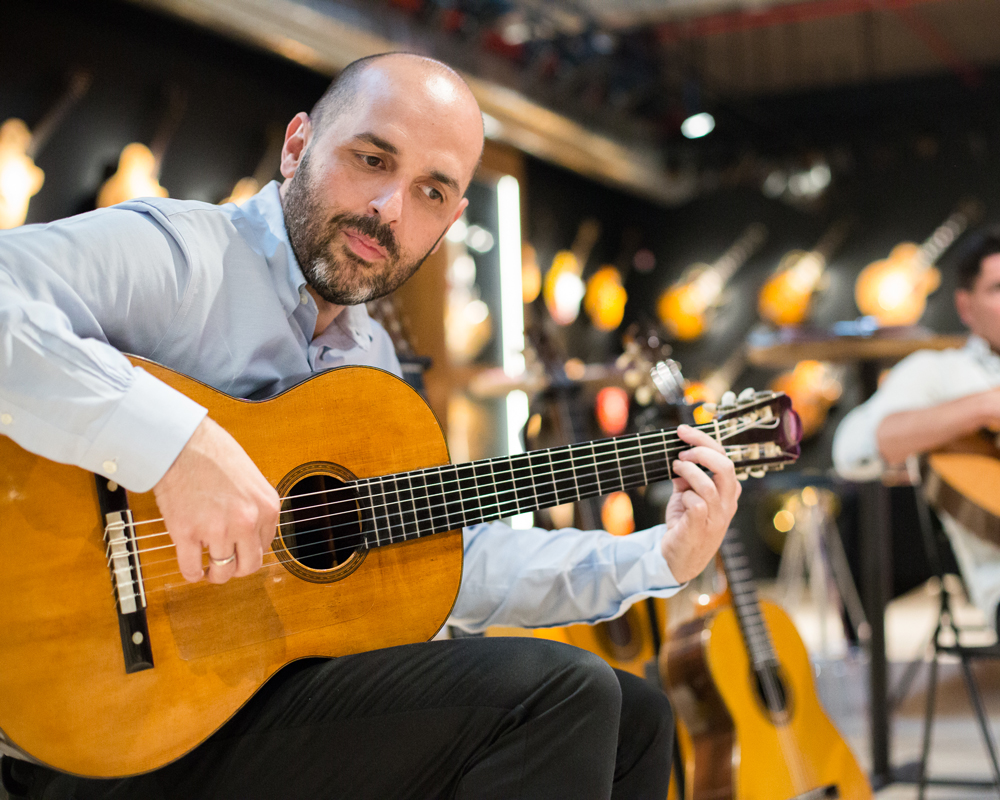 Coordinator of the Bachelor Degree in Flamenco Performance

Coordinator of the Flamenco School

David Leiva is a guitarist, composer, transcriber, and educator.

He is the current head of the flamenco department at Taller de Músics, as well as the director of the Institut Flamenco de Barcelona. He is also the artistic director of the Ciutat Flamenco festival. Furthermore, he’s also Paco de Lucía’s official transcriber.

Born in Almería but raised in Barcelona, where he continues to live, he began his music career at the age of 10. He is a graduate in Music Pedagogy, Classic Guitar, and Flamenco Guitar.

As a soloist he has played at many of the top theatres, festivals and concert halls around the world.  As a backing guitarist he has shared a stage with great names from the world of flamenco cante and dance. In 2012 he released his first record, Fuente Victoria, which received very good reviews from specialists in the genre.

He has composed various highly-successful dance shows such as Rojo sobre negro, Combo flamenco and Morente & Roach in memoriam. He leads the group Tablao de Músics and Las Noray, who debuted at the Ciutat Flamenco festival.

He has spoken at conferences and given masterclasses in conservatories, schools and universities around Spain and in Europe and America, which have featured on radio, television and in the press. He contributes to various specialist flamenco magazines, in which he has published articles about flamenco guitar, cante and flamenco music pedagogy.

In search of his own personal sound, he has brought out his own brand of strings (Leiva Strings) with Flamencolive, as well as the Montes-Leiva guitars with Juan Montes.

David Leiva has so far authored 60 publications (books and DVDs), some of which have been a huge successes in flamenco pedagogy. He is the first writer to have created a musical method for flamenco cante and dancing, titled Método de cante y baile flamenco y su acompañamiento (Method of Flamenco Cante and Dance and its Accompaniment) (book + CD) and Tratado del acompañamiento al cante (Treatise on accompanying cante) (book + CD). These collections are considered among the best flamenco methodologies. He has had further success with the books Camarón guitar tab and Enrique Morente guitar tab, which are the first to be written about some of the songs by these two great cantaores.

He has worked for some of the top stars in the country, carrying out editorial projects for, among others, Alejandro Sanz, Joaquín Sabina, Pablo Alborán, Los Chichos, Fito y los Fitipaldis, Melendi, Antonio Vega and Mago de Oz.

In 2013 he began the official transcription of the musical works of the brilliant maestro Paco de Lucía for the publisher and producer Flamencolive, taking on the biggest professional challenge of his life as a transcriber and receiving excellent reviews from the world of flamenco. So far, he has transcribed the albums Siroco, Zyryab, Solo quiero caminar, Luzia and El Duende Flamenco; and he continues to work on the transcription of the rest of de Lucía’s discography. Furthermore, in 2014 he began the series Antología de falsetas de Paco de Lucía, an official collection of falsetas divided into three periods and by styles.