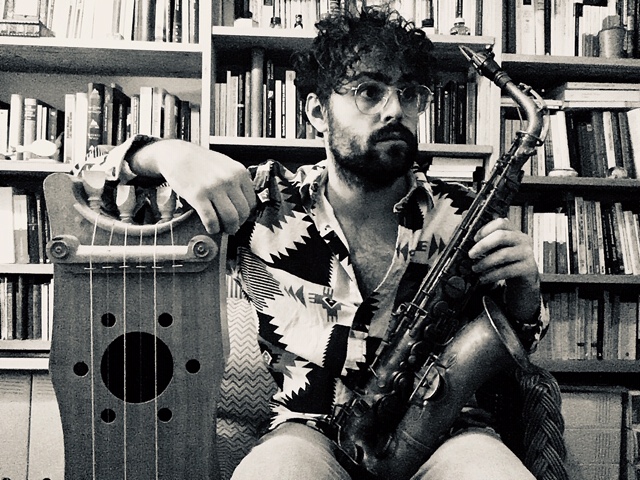 Eduardo Pons began his music studies when he was six years old and started playing the sax at eight. His training as a classical saxophonist took place at Huesca Conservatory, where he did his professional studies and learned from David Ruiz, with whom he worked on contemporary music repertory and graduated with a distinction. Eduardo is a member of BASIAJ, a symphonic band formed by a selection of Aragonese musicians.

He became a popularly requested musician by different kinds of bands and music formations such as Titiriteros de Binéfar (folk and children’s entertainment), Doctor Loncho (hip-hop) or The Faith Keepers (funk, soul), with whom he developed his professional career participating on cycles such as Artistas en ruta or Girando por Salas and winning important contests as Ambar Z Music, Enclave de Agua or the band’s contest Imagina Funk.

He travelled around Spain playing in festivals such as Europa Sur, Imagina Funk, Black is Black, Slap Festival, FIZ, Territorios or the Zaragoza Jazz Festival. He also played in England, Italy and Austria on many occasions and recorded albums like Leap Of Faith, chosen The Best Album of Aragón in 2013, or Kuye.

In 2016 he participated arranging strings and playing in the recording of Bajo el Royo que no Cesa from the rapper Sharif.

On the Jazz Scene, in 2014 Eduardo Pons and Jorge García founded the project BANG that will soon release its first work piece, focused on a fusion of modal jazz and progressive rock.

He received jazz and modern harmony lessons from Bobby Martínez and Hugo Astudillo.

Eduardo has recently finished his Bachelor of Jazz and Modern Music in Taller de Músics ESEM where he also teaches students from the project Espai Sènior.