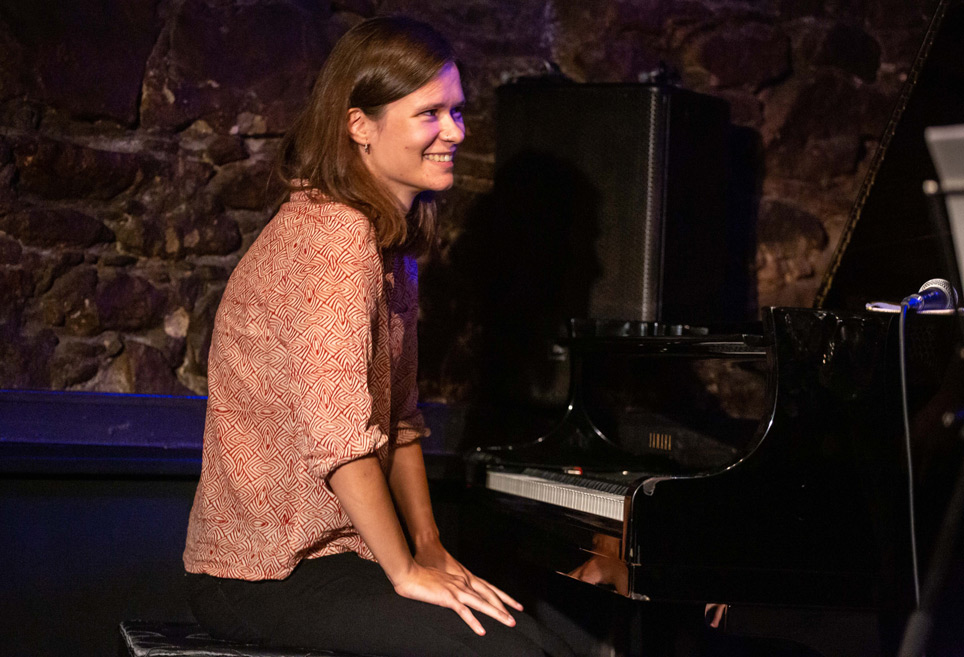 Èlia Lucas Gardeñas (1996) grew up in a rural environment in the Alt Penedès region and started playing the piano with the villafranco Paton Felices. At the age of 16, she entered the Municipal School of Music of Vilafranca where she studied musical language and piano with Montse Ríos and Àlex Cassanyes. At the age of 18, she began her training at the Taller de Músics in Barcelona with teachers Cristina Canet, Alejandro Di Costanzo, Vicenç Solsona, Joan Monné, Jordi Gardeñas, Sergi Sirvent, Jordi Farrés and Alfons Carrascosa, among others.

She is currently graduated in Jazz Piano Performance at Taller de Múysics ESEM, with a scholarship from SGAE, granted for three consecutive years.

As a performer, she has played with three big bands: Contrabaix Big Band (Vicens Martín), Jove Big Band (Marcel-lí Bayer) and Micaela Chalmeta (David Pastor). With the latter, she performed at the Valencia Jazz Festival (2018), at the 12 Hores de Jazz a la Ronda (2019) and aty NB Fest in Pamplona (2021).

She has also participated in multidisciplinary projects, playing the soundtrack of play ARA with the company KunstAnt (2016) and performing in the Sala Apolo with the collective Total Music Lab, coordinated by Joan Díaz in the framework of the festival Connexions in Barcelona (2017), presenting El Paisatge Sonor de les Delícies“. Recently she participated in the recording of the album Música Bruja led by the composer Violeta Tello, performing concerts in Barcelona and Madrid.

She has been involved in the project Tàndem Duo with guitarist Pau Mainé and also in the sextet Afluents, created based on the desire to share music between the members, and play exclusively original compositions, achieving a sound of their own. Afluents. Currently leads Èlia Lucas 4t, presenting her first work Introspecció (2021).

As a teacher she has mainly developed at the Espai Senior del Taller de Músics from 2016 and at the Diapasó school from 2018, giving piano and musical language classes. She has also been a volunteer in the Taller Obert social project, substituting in different music schools and teaching at the Juliol Intensiu in the Taller de Músics school, where she is currently a teacher in the Youth School and also in the Free Program.