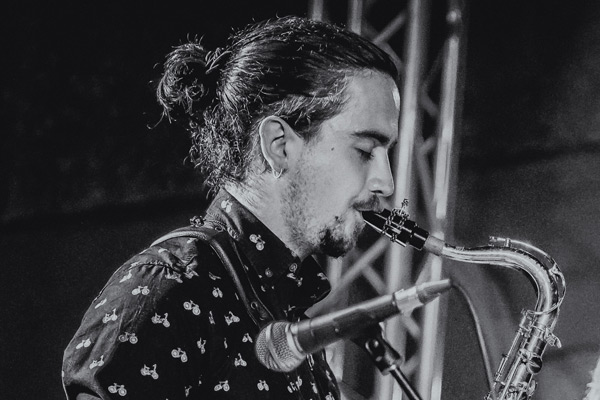 Javier Sánchez was born in Guadalajara and began studying music at the age of six at the Conservatorio Sebastián Durón. In 2017 he finished his vocational diploma in classical clarinet with two honours. At the age of 18 he decided to move to Barcelona to continue his musical studies and, for a year he prepared to access the a certificate of higher education in Jazz and Modern Music with teachers such as Gabriel Amargant, Marcel-lí Bayer, Xavier Figuerola and Lluís Vergés.

He is currently involved in several projects such as Chano Domínguez & Taller de Músics Ensemble, Suite de Lucía and The Goliards Collective. He has performed on various stages such as the Cadiz Jazz Festival, the Teatre Coliseum as part of the Festival Mas i Mas, La Mercé 2020, the Mercat de Música Viva de Vic, the ZWE in Vienna, the Jamboree Jazz Club and the Nova Jazz Cava in Terrassa. He has also played with musicians such as Carles Benavent, Antonio Serrano, Rafael de Utrera, Marc Miralta and Manel Fortià, among others.

As a leader, in 2020 he premiered his first suite for octet, composed during the pandemic. At the time of writing, he is starting a new project of original music for quintet.