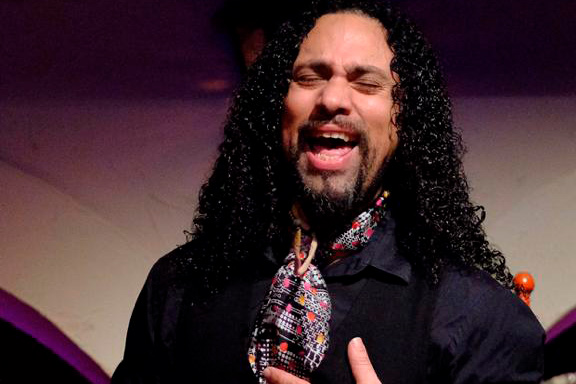 Miguel de la Tolea is a flamenco singer with an extensive career in the world of flamenco. He has performed in the most important theatres in the world and has worked with artists such as Enrique Morente, Tomatito, Niña Pastori, Joaquín Sabina, Miguel Poveda, Estrella Morente, Carmen Cortés, and Juan Ramírez, among others. He currently performs at the Tablao de Carmen, Los Tarantos, City Hall, and Tablao Flamenco Cordobés.

Miguel Ángel Montero Martín, better known as ‘Miguel de la Tolea’, was born in Barcelona but grew up in different cities around Spain. From a young age he has sung and danced in the top tablaos and flamenco spaces. At the age of 16 he became one of the members of the group Cambalache, together with nine other musicians, with whom he travelled around Europe representing Taller de Músics. At the age of 18, he joined Joaquín Cortés’ company with which he toured the most important theatres in the world for a year and a half. Later, he travelled to Japan with his mother, La Tolea, his uncle, El Toleo and a flamenco group to perform at the tablao El Flamenco de Osaka, where he stayed for six months.

Throughout his career he has also worked in Cecilia Gómez’s company and with important artists such as Enrique Morente, Tomatito, Niña Pastori, Joaquín Sabina, Miguel Poveda, Estrella Morente, Carmen Cortés and Juan Ramírez, among others. In addition, he has performed in the principal theatres in Barcelona such as the Liceu, the Palau de la Música and L’Auditori, as well as the Teatro Real and La Zarzuela in Madrid, La Maestranza in Seville, the Guggenheim Theatre in Bilbao, the Radio City in New York, the Royal Albert Hall in London and the Champs Elysees in Paris, to mention just a few.

In recent years he has worked as a singer in different venues and tablaos such as Tablao del Carmen, Los Tarantos, City Hall and Tablao Flamenco Cordobés. He is also a member of the guitarist Carlos de Jacoba’ group, singing and playing guitar.