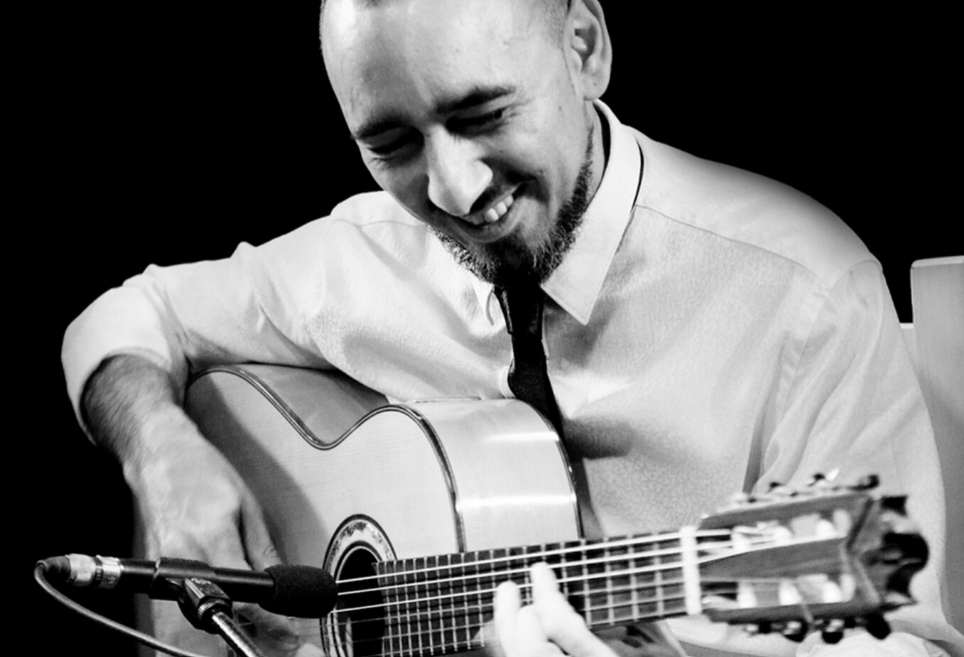 The music producer, arranger, composer and guitarist Rycardo Moreno was born in Lebrija (Seville) in 1981. Gerardo Núñez, flamenco and jazz guitarist and composer, watches him launching his career as a solo guitarist, while becoming his godfather.

Among his recordings, Varekai and Galeano stand out, both of them released by the Nuba Karonte label. Moreover, the flamenco guitarist participated in the latest album by El Lebrijano Cuando El Lebrijano canta, se moja el agua, as well as in the album by the pianist Dorantes Sin Muros; in Esperanza Fernández’s album Mi voz en tu palabra; on the albums by Jorge Pardo Historias de Rahda and Kkrishna y Djinn, the latter being a winner of the Independent Music Awards; on the album by Lole Montoya, where he recorded guitars and arranged the song by Alejandro Sanz Metáforas, and on the latest album by Iya. He was also the second guitarist on Raimundo Amador’s Half Man, Half Guitar tour and on Tomás de Perrate Infundio’s album. He collaborated with the Dorantes Quartet as a guitarist in the Jazz Festival of San Sebastian, San Javier, Toulouse, Paris and in the National Auditorium of Spain; with Jorge Pardo’s quartet, he performed with Huellas in the Jazz Festival of Sanlúcar de Barrameda, Arnedo (La Rioja) and Palencia, among others, and with the group King of Cai, he participated in the Festival of Naguanagua.

Rycardo Moreno worked several years in the flamenco biennial of Seville with artists such as Tomas de Perrate, Dorantes or Ricardo Pachon. In 2012 he participated as musical director, as well as a guitarist, in the show of the flamenco dancer Juan de Juan Flamenco hoofer’s.

During his stay in New York, the guitarist worked with his flamenco world music quartet in prestigious venues such as Zinc Bar, Le Poisson Rouge and Terraza 7. He also performed at the Instituto Cervantes in New York and at the Circulo Español with Javier Ruibal and collaborated with the flamenco dancer Juan de Juan and the American Jason Samuels Smith at the Mad Museum in New York.

Moreno won the prize for the best tourist spot as a producer, arranger and guitarist of the song for Andalusia I love you very much tourism campaign. He teaches jazz-flamenco instrumental ensemble at the Taller de Músics Escuela Superior de Estudios Musicales.