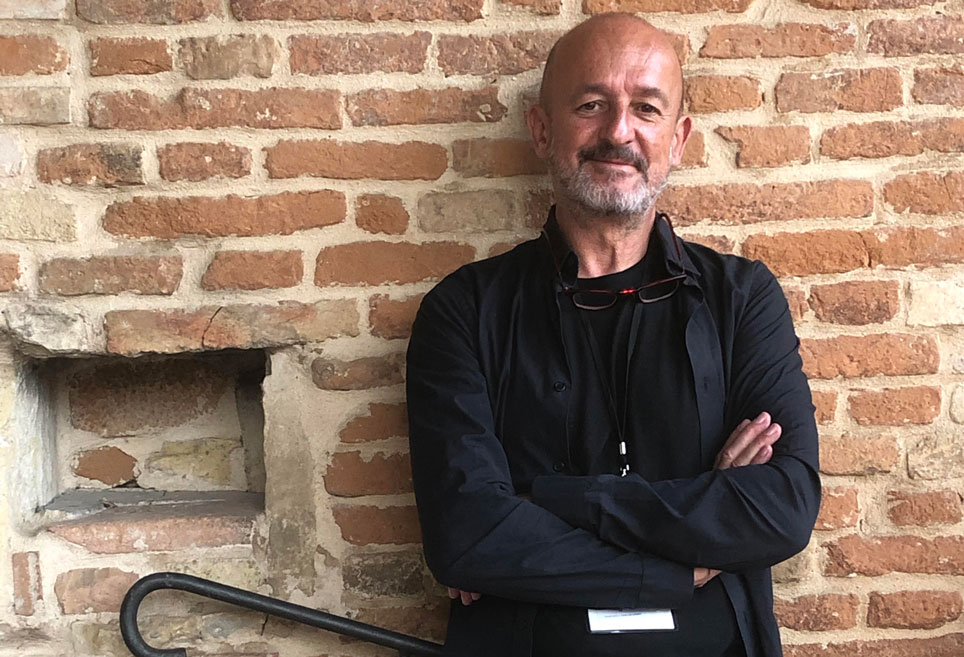 Born in Calella (Maresme), he began his apprenticeship in music in a self-taught way, above all thanks to the great voices of Frank Sinatra, Tonny Bennett, Nat ‘King’ Cole, Ella Fitzgerald…, and the great orchestras of the time: Duke Ellington, Count Basie, Nelson Riddle and Don Costa.

With the arrival of rock, pop, the Beatles, folk, R&B, soul and funk, the doors are open to a different way of singing, which he assumes to have created. This allows him to make a living from music, being part of different commercial and eclectic groups, for a few years. He also promotes another facet of singer-songwriter, with which he tried his luck, reaching the conclusion that he needed to improve his academic training for which decided to start a university career linked to his other passion, fiction and cinema. It was then that he studied Audiovisual Communication at the Universitat Pompeu Fabra, graduating in 1999. During these years, he also studied at the New York Film Academy (NYFA) in the United States, among other workshops and seminars on the subject of screenwriting and filmmaking.

When he finished this stage, the need to make music reappeared strongly to him, yet in a different way. Unexpectedly (or not), and at the beginning of the 21st century, jazz manifested itself as a main vehicle of musical expression, leading him to meet up with a whole group of musicians whom he has been collaborating since the beginning: Emilio Solla, Nono Fernández, Aldo Caviglia, David Xirgu, Tom Warburton, Daniel Domínguez, Dani Pérez, David González, Roger Mas and, later, Jose Alberto Medina, Federico Lechner, Toño Miguel, Borja Barrueta, David Quevedo, Jordi Matas, Juan R. Berbín, Mariano Steimberg, Martín Leiton, Andreu Zaragoza and Ramon Prats. He has also collaborated in New York with musicians such as Solla himself, Ben Monder, Ted Poor, Jorge Roeder, Víctor Prieto, John Ellis, Oscar Feldman, Nate Radley and Alexis Quadrado, etc.

Since then, he has released two albums as a leader, Yesterday’s Sun (Fresh Sound – 2006), which led him to present it at the 38th Barcelona Jazz Festival, at the Auditori and the prestigious Dizzy’s Club at Lincoln Center in New York, for four days, and Unguarded Smiles (Quadrant Records – 2010). It is in this second record project, registered in New Jersey, that he exploited his lyricist side, which he already started exploring for his first CD. In this work, besides singing, he puts lyrics to music written by great contemporary composers such as Brad Mehldau, Kurt Rosenwinkel or creations from other times signed by Frederic Mompou.

Nowadays, he is preparing his third work in which he recovers, without leaving aside the sounds of jazz, the spirit of the singer-songwriter, introducing the musical composition of most of the themes in our repertoire. He has taught Language and Communication and singing at the ESEM. He currently teaches English at the same centre and also gives private lessons in singing and jazz and modern repertoire, and participates in seminars on the subject and on lyric writing.